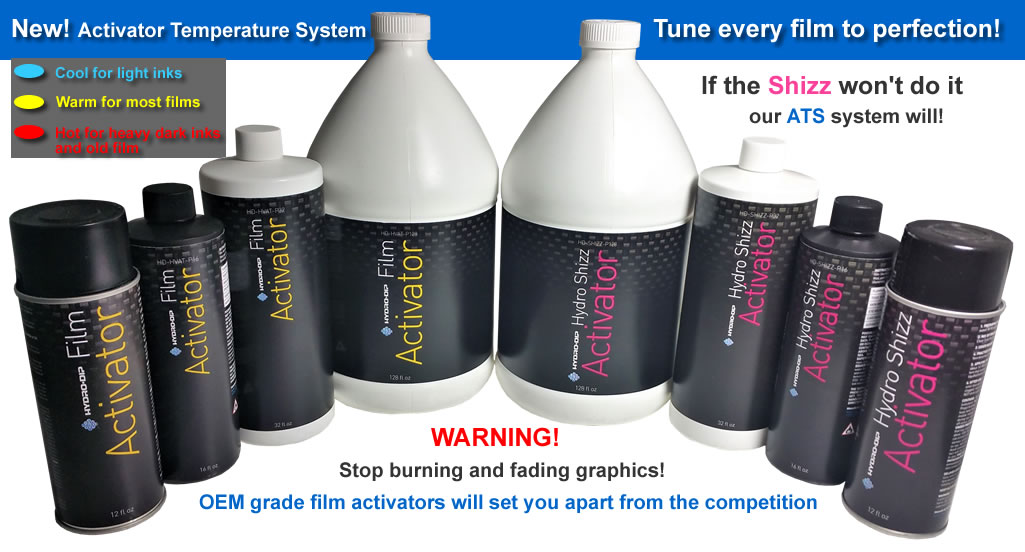 Hydro-Dip Custom Film Activators will will allow dippers the ability to adjust to a variety of films coming from various suppliers. It’s common knowledge that no single film activator on the market is best for all films, and the various ink systems used to print the films. Dippers should have the ability to adjust and tune films as needed. Hydro Dip offers 4 activators, that will work well for almost any film in the industry. Our activators work well with most all TWN films.

Hydro Shizz– We developed this activator for MultiCam and Kryptek films. However, we found this one to be our most universal activator, offering improved elasticity of ink systems and is forgiving to beginner dippers. The Shizz is gentle on colors keeping them bright and vibrant. Our guys always reach for this one first!

ATS Warm- An awesome universal activator for most films. This is a nice backup activator to have on your shelf.

ATS Hot- Heavy dark inks, old stuborn films, and for when you’re feeling the need to step it up. Hot activators break inks and films down more quickly. The down side is that dipping windows are shortened increasing risk of fading your colors. Like a race car, performance is an option if you know how to drive it!

There are no reviews yet.